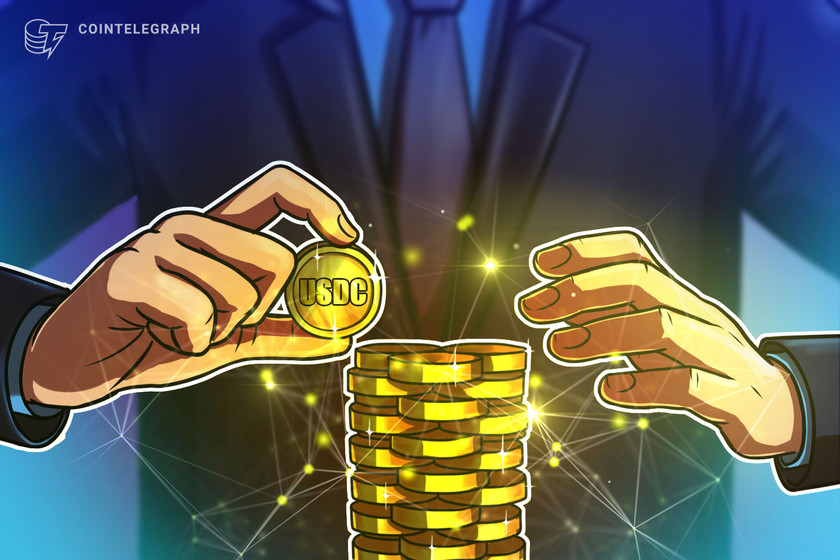 As Cointelegraph previously reported, sanctions imposed on cryptocurrency mixer Tornado Cash by the U.S. Treasury Department had a marked effect on the capitalization of both USDC and its biggest competitor, Tether (USDT).

While USDT markets saw growth of almost $2 billion in the days following the sanctions, USDC’s market cap shrunk after its issuer Circle decided to freeze some 75,000 USDC tokens held by addresses linked to Tornado Cash.

Various commentators have suggested that some users shifted funds from USDC to USDT, given the correlation in the decline and growth of the respective stablecoins’ market cap. Data from Glassnode shows that the percent of USDC held by the top 1% of addresses reached a 22-month low of 87.667%.

While on-chain data shows that there has been a sell-off of USDC over the past fortnight, metrics released by Glassnode on Aug. 22 showed that the seven-day moving average of USDC exchange deposits also reached its lowest point since March 2021.

While the market cap of USDC might be down, the stablecoin reached a three year high in terms of weekly mean transaction volume, surpassing the previous high registered in June 2022.

USDC had been touted to contend with USDT as the top stablecoin of 2022 by market capitalization in July 2022, edging to within $11 billion of Tether’s market cap. This percentage has eroded since the Tornado Cash debacle.

Tether remains mute on whether it would blacklist or freeze USDT tokens linked to the sanctioned mixer. Cointelegraph has reached out to the stablecoin operator to ascertain whether it will follow Circle’s lead in freezing assets linked to Tornado Cash addresses, given the potential legal ramifications.