A rare market signal with a foreboding name is telling traders to prepare for a possible significant decline. Invoking the memory of the flaming explosion of LZ 129 Hindenburg in 1937, the stock market “Hindenburg Omen” signal plays on images of a monumental disaster.

It is easy to see why multiple Hindenburg Omen observations preceded the 35% drop in the S&P 500 in early 2020 – certainly a stock market disaster by any measure. Let’s dig into what the Hindenburg Omen indicator is and why its signals are important warnings for precarious market circumstances.

What is the Hindenburg Omen?

The Hindenburg Omen is a term used in stock trading where certain market conditions align to form a signal – a warning that conditions are ripe for a steep market decline.

What are the market conditions to incite this tumble? Look for the following four conditions all occurring on the same day:

Below you can see all of the signals for the Hindenburg Omen mapped on a chart. 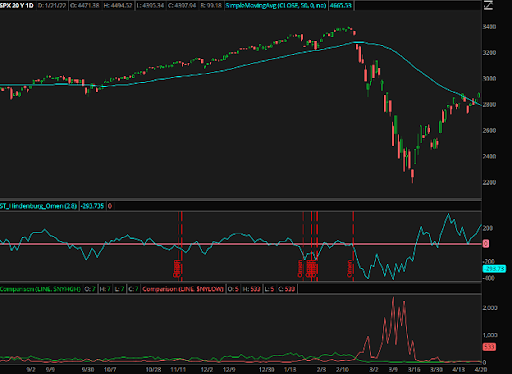 That warning puts us on notice that for the subsequent 30 days after any observation, there is a greater than normal chance of a crash on any one of those days where the McClellan oscillator is less than zero.

Market observers saw some signals of another Hindenburg Omen as the markets started to decline in January of 2022. Whether this induces another crash remains to be seen, but it highlights why it is important to keep an eye out for Hindenburg Omen indicators, especially in unpredictable markets. They are infrequent, but when they occur, it can give us an early warning to watch for signs that might corroborate a decline. 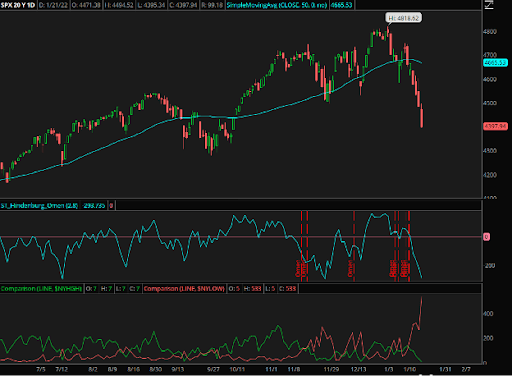 In late 2021 and again in early 2022, we saw a cluster of Hindenburg Omen observations, as recently as January 14th. That has put us on warning to look for exactly the kind of selling which we have already observed and the potential for even more. On any day when the McClellan oscillator is below zero, down moves could turn ugly.

This warning sign will remain for 30 days from the last observation. When significant selling follows a Hindenburg Omen and then turns the 50-day moving average of the NYSE composite index down, as it has in early 2022. Then there cannot be another, fresh Hindenburg observation until the moving average turns back up. Bear markets often begin with attempts to regain a new high which fail. Often this action can set up fresh Hindenburg Omen signals for a subsequent leg down. If markets do bounce, it will be something to watch for.

There are some who say that the Hindenburg, filled with hydrogen, was destined for disaster.  However, the airship travelled ten times from Germany to the United States without incident before the crossing where it burst into flames and 36% of those aboard perished. Likewise, not every observation of a Hindenburg Omen ends in a stock market disaster. It is, however, a sign of a dangerous condition.

Be Ready to Spot the Signals

For users of thinkorswim (TOS), my chart layout for tracking Hindenburg Omen signals can be imported using the following share link:  http://tos.mx/oZZDccE

And if you are interested in learning more about how I follow the markets and use indicators for trading, join me and other veteran traders in the Voodoo Mastery Program. We look forward to seeing you there! 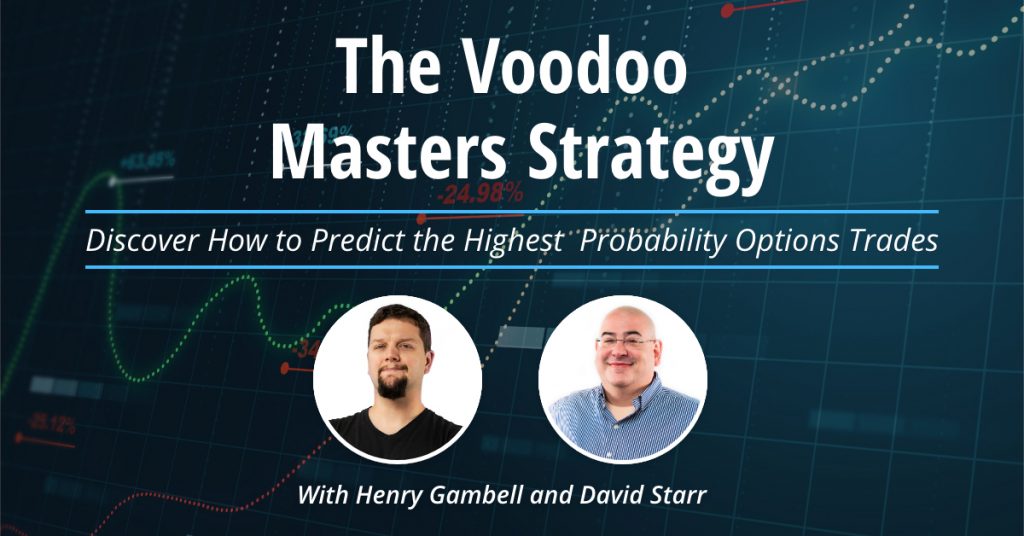