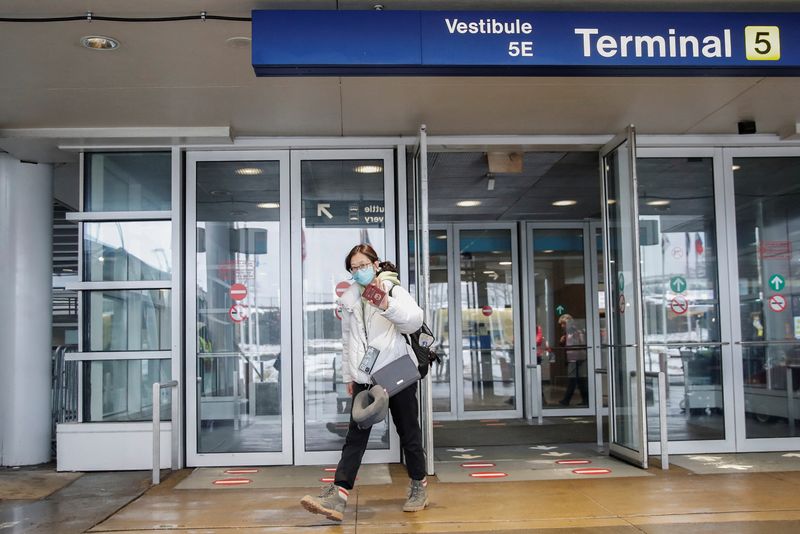 WASHINGTON (Reuters) -The U.S. government said on Friday it would suspend 44 China-bound flights from the United States by four Chinese carriers in response to the Chinese government’s decision to suspend some U.S. carrier flights over COVID-19 concerns.

The suspensions will begin on Jan. 30 with Xiamen Airlines’ scheduled Los Angeles-to-Xiamen flight and run through March 29, the Transportation Department said.

Liu Pengyu, a spokesman for the Chinese Embassy in Washington, said Friday the policy for international passenger flights entering China has “been applied equally to Chinese and foreign airlines in a fair, open and transparent way.”

He called the U.S. move “very unreasonable” and added “We urge the U.S. side to stop disrupting and restricting the normal passenger flights” by Chinese airlines.”

Airlines for America, a trade group representing the three U.S. carriers affected by China’s move along with others, said it supported Washington’s action “to ensure the fair treatment of U.S. airlines in the Chinese market.”

The Transportation Department said France and Germany have taken similar action against China’s COVID-19 actions. It said China’s suspension of the 44 flights “are adverse to the public interest and warrant proportionate remedial action.” It added that China’s “unilateral actions against the named U.S. carriers are inconsistent” with a bilateral agreement.

The department said it was prepared to revisit its action if China revised its “policies to bring about the necessary improved situation for U.S. carriers.” It warned that if China cancels more flights, “we reserve the right to take additional action.”

China has all but shut its borders to travelers, cutting total international flights to just 200 a week, or 2% of pre-pandemic levels, the Civil Aviation Administration of China (CAAC) said in September.

The number of U.S. flights being scrapped has surged since December, as infections caused by the highly contagious Omicron variant of the coronavirus soared to record highs in the United States.

Beijing and Washington have sparred over air services since the start of the pandemic. In August, the U.S. Transportation Department limited four flights from Chinese carriers to 40% passenger capacity for four weeks after Beijing imposed identical limits on four United Airlines flights.

Before the recent cancellations, three U.S. airlines and four Chinese carriers were operating about 20 flights a week between the countries, well below the figure of more than 100 per week before the pandemic.

Disclaimer: Fusion Media would like to remind you that the data contained in this website is not necessarily real-time nor accurate. All CFDs (stocks, indexes, futures) and Forex prices are not provided by exchanges but rather by market makers, and so prices may not be accurate and may differ from the actual market price, meaning prices are indicative and not appropriate for trading purposes. Therefore Fusion Media doesn`t bear any responsibility for any trading losses you might incur as a result of using this data.

Fusion Media or anyone involved with Fusion Media will not accept any liability for loss or damage as a result of reliance on the information including data, quotes, charts and buy/sell signals contained within this website. Please be fully informed regarding the risks and costs associated with trading the financial markets, it is one of the riskiest investment forms possible.